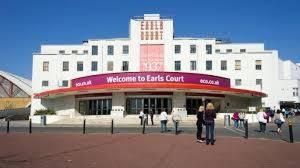 With rumours of a revised Earls Court Masterplan being submitted in Spring 2019  by developer Capital and Counties Properties Plc (Capco), with no community input,  last night, Deputy Leader of Kensington and Chelsea Council, Kim Taylor-Smith, met with representatives from the Earl’s Court Area Action Group, Save Earl’s Court Campaigners and Save Earl’s Court Supporters Club to discuss their plans for the world's greenest venue and a range of green housing options on the site of the former Earl's Court Exhibition Centre.

Artist Duggie Fields and Andy Littlechild member of the RMT Union’s National Executive Committee also attended.  Chris Skeith, CEO of the Association of Event Organisers, could not attend but sent a message expressing his members’ interest in exploring the opportunities that a new venue would offer.

After 5 years of campaigning, Kim Taylor-Smith’s visit to Earl’s Court was the first ever meeting between campaigners and a senior member of the Council.  This is a testament to the Save Earl’s Court campaign’s staying power and increasing awareness that short, medium and long-term solutions have to be found for this site.

Kim Taylor-Smith voiced his concerns that it was a real possibility that the Earls Court site could lie fallow for a number of years like Battersea Power Station.

After listening to some of the imaginative and socially inclusive ideas put forward by the group he said that ‘meanwhile’ uses for the site should be explored.

Picture: Kim Taylor-Smith (in brown jacket at the back) with attendees at last night's meeting in Earl's Court.

ECAAG calls on Mayor Khan to intervene in the Earl’s Court West Kensington Opportunity Area so homes and employment can be generated on this complex site, at its centre a replacement mixed use green Exhibition/Multi-purpose Centre to help promote London in a post-Brexit world.

In a post-Brexit world, London must be open.

The times they are a changing for the Earls Court Masterplan.

The Earl’s Court Area Action Group is not aligned to any particular party or political movement and is comprised of:

Residents of the West Kensington and Gibbs Green Estates

The Friends of Brompton Cemetery

Campaign film “Save Earl’s Court: Our Voices Will Be Heard at  https://www.youtube.com/watch?v=jcR5j4EhN38