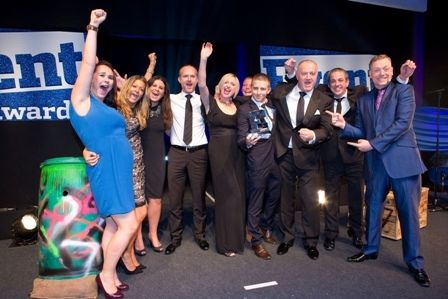 Media 10 are this week celebrating winning Exhibition Organiser of the Year Award for the fourth consecutive year, at the Event magazine Awards at the Roundhouse. Judges said that Media 10 was not â€œa business to rest on its laurelsâ€' and that its' impressive year of achievements made it the undisputed winner of that category.Â

Having had more than 700,000 visitors across its 13 events in 2012-13, Media 10 had; launched two shows; re-launched 100% Design and achieved 35 per cent more visitors than its previous year when owned by Reed Exhibitions; held the first official Star Trek convention to take place in the city for more than ten years with Destination Star Trek London. The company also launched Grand Designs Melbourne in May 2012 hosted the prestigious Coronation Festival at Buckingham Palace in July and overall has seen impressive visitor increases at Grand Designs Live London and Birmingham and across the Ideal Home Show.

With turnover reaching over Â£30m, the Essex based company has had a remarkable year and now has even higher hopes for the year ahead. With plans in place for two new Ideal Home shows in Manchester, a new optical event with 100% Optical and with Design Shanghai also planned for the new-year, Media 10 hopes to break even more ground in the events industry.

Lee Newton states â€œI am absolutely delighted to have won this award, again, for the fourth year running. It's a massive achievement for a 200 employee strong, privately owned company to hold our place at the top of the events industry! Although we are rapidly growing our event portfolio, our main focus always remains centred on putting on the best event in our area of expertise and to be the outright winner in this category is testament to this

Rachel Bull, associate editor of Event and chair of the awards judging panel Â states: "Media 10 was the worthy winner of Event magazine's Exhibition Organiser of the Year award for the fourth consecutive year. Its ever-expanding portfolio of well-known exhibitions, as well as its international reach, impressed the judges. Media 10's continuous vigour to develop its existing shows and create stellar new ones, such as the Coronation Festival in Buckingham Palace Gardens, means it will be hard to beat in 2014."