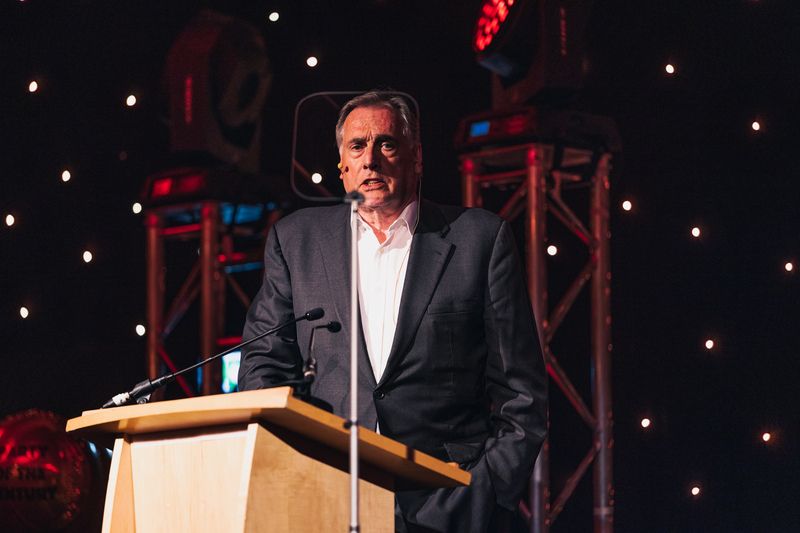 The AEO Centenary Party (& Awards) saw attendees flock to the Vox on the 10th December, for an industry celebration.

The celebrations were split in two, starting with a throwback in history to when AEO was formed coupled with 100 images of events over the years and a pathe clip taking all guests back in time.

Philip Soar was named as the Outstanding Contribution to the Industry winner, with members commenting on his achievements with Blenheim, Brand Events, Closer Still, and Nineteen Events.

One member referred to Soar as a living encyclopaedia for the industry, while another commented on his remarkable backstory, citing the shows he’s launched, bought and sold, shaping the industry that we know today.

A mixologist delivered an energetic performance in 20s style before Sally Phillips, comedian and celebrity host, presented the awards.

There was 20s themed fun with NEC’s #partynecessities and competitions supported by Cvent and Circdata, won by Sam O’Connell from easyfairs, and Gemma Nicholls from GES.

Chris Skeith OBE, chief executive of AEO, says: We are overwhelmed with the messages of support received from across the industry. The feedback on the Centenary Party has been amazing and is a humbling reminder, that even in the face of adversity, the industry stands behind us.”

“The celebratory mood in the room was fantastic and it was so wonderful to see all of the winners collecting their trophies. A fitting end to a challenging year.”

Skeith concluded: “I’d like to give special thanks to headline sponsors, the NEC for their incredible efforts in bringing the event to life and  Circdata for their registration support. The support of all of our sponsors and partners goes such a long way. Thanks also goes to our very own historian Phil Soar who collected images from across the industry, reflective of the last 100 years and Sarah Scott and the NEC team who linked those images to create a compelling and fitting fly back through time.  The AEO team who worked hard to deliver this event in challenging times and the Event Working Group who played a pivotal role in shaping it. Last but not least, to the judges who generously gave their time to select the winners, we thank you. Once again, congratulations to the winners and every one of you.”

To view the gallery from the day, click here: https://clients.jonnydonovan.com/p/87269pwg

Winners and the judges’ comments are below:

The judges were impressed by the excellent ingenuity and commitment to the quality of the content and speakers across the 4-day conference in an extremely challenging environment. The new level of data acquired and the ability to then market the f2f format to that community, along with exceeding the financial projections was particularly impressive.

The judges commented that the scale of the event and the results speak for themselves, not only was this a launch show, but they also managed to launch outside, a stand-out winner by every metric.

The judges said this was a true lockdown initiative and a very creative response to the crisis that was aligned to brand values, helping to connect the community while delivering money to charities in a myriad of innovative ways. Well done Racoon for making such an impact and having lots of fun at the same time.

The judges commented this was a very innovative approach, creating events that delivered real value to all stakeholders. Uniting over 3 weeks was admirable and the testimonials impressive.

Best Use of Technology: Clarion Events - T&C 360i

The judges said that the technology used was highly impressive both in content and the revenue it generated.  Recognising how tired people were of virtual events Clarion worked on providing a cool memory making experience for the tech savvy audience.

The judges commented Alexia Maycock showed grit and determination to connect her audiences, she rose impressively to the challenge. Her personal attributes include; Strong, Inspiring, Genuine, Kind, Supportive, Passionate, Resilient, Inspirational to name but a few.  Alexia is one to watch…

The judges said Lisa Collard is a standout hero and deserves the award for stepping up and forward, for no reward.  Re-training, learning, doing, coping, delivering, and organising - she is the equivalent of 5 staff, she put her heart and soul into the job and does it with a smile and good grace - she is a winner

The judges commented Courtney Baldwin is a very inspiring example for the Indomitable Spirit Award, who during the pandemic took on the challenges with focus and ownership, putting into operation the difficult task of having to cancel their show the day before its open.  Courtney kept the confidence of the customers, turning the perceptions of detractors which was no easy task and to help rebuild the business back.

Venue of the Century – Olympia London

The judges said there was one obvious winner as Olympia is the only venue which has been in continuous use as a venue for the whole 100 years. It was built in 1885 to be a large venue capable of holding the Royal Agricultural Show and the Royal Tournament. The National Hall frontage was added in 1932 and the venue is now undergoing a complete rebuild to make it a superb new venue for West London.

The judges said, there are very few companies that are consistently mentioned in both the AEO and EN Awards each year, but one stands out beyond all others – This business continually evolves in technology and stock – from hands-free scanning and registration in a pandemic, through to design solutions to help reduce build time and protect the environment with Show Ready, they continually evolve their processes and people to challenge the norm and help the industry move forward. There is virtually no major show in the last 50 years with which they have not been involved.

The judges said, If you were to survey people in the street anywhere in the UK and ask them "Name an exhibition" - then this is the one which would get by far the most recognition. Devised in 1908, it has run its fun and frolics for more than 100 years.

The judges said they picked an event which first ran in 1950 and which has, for half a century, been the largest exhibition in the UK. It was, in 1976, the very first event ever to run at the NEC and since that date, has been the largest show to run at the NEC and the only one ever to fill the whole of the space. For five decades it has generated more revenue than any other trade show in the United Kingdom.

Organiser of the Century – Montgomery

The judges said, we are celebrating 100 years, and this organiser is the only one who has been a member of the AEO for the whole century. It was founded in 1895 when the first Building Trades Exhibition ran in the Royal Agricultural Hall to help struggling clay miners in Cornwall. That show became InterBuild which by 2010 had become the longest-running annual show the United Kingdom has ever seen. Now running more than 60 events globally and, after 126 years, still a major player in our industry Montgomery can claim to be the true Organiser of the Century.